September 01, 2011 David C. Driskell Center for the Visual Arts and Culture of African Americans and the African Diaspora 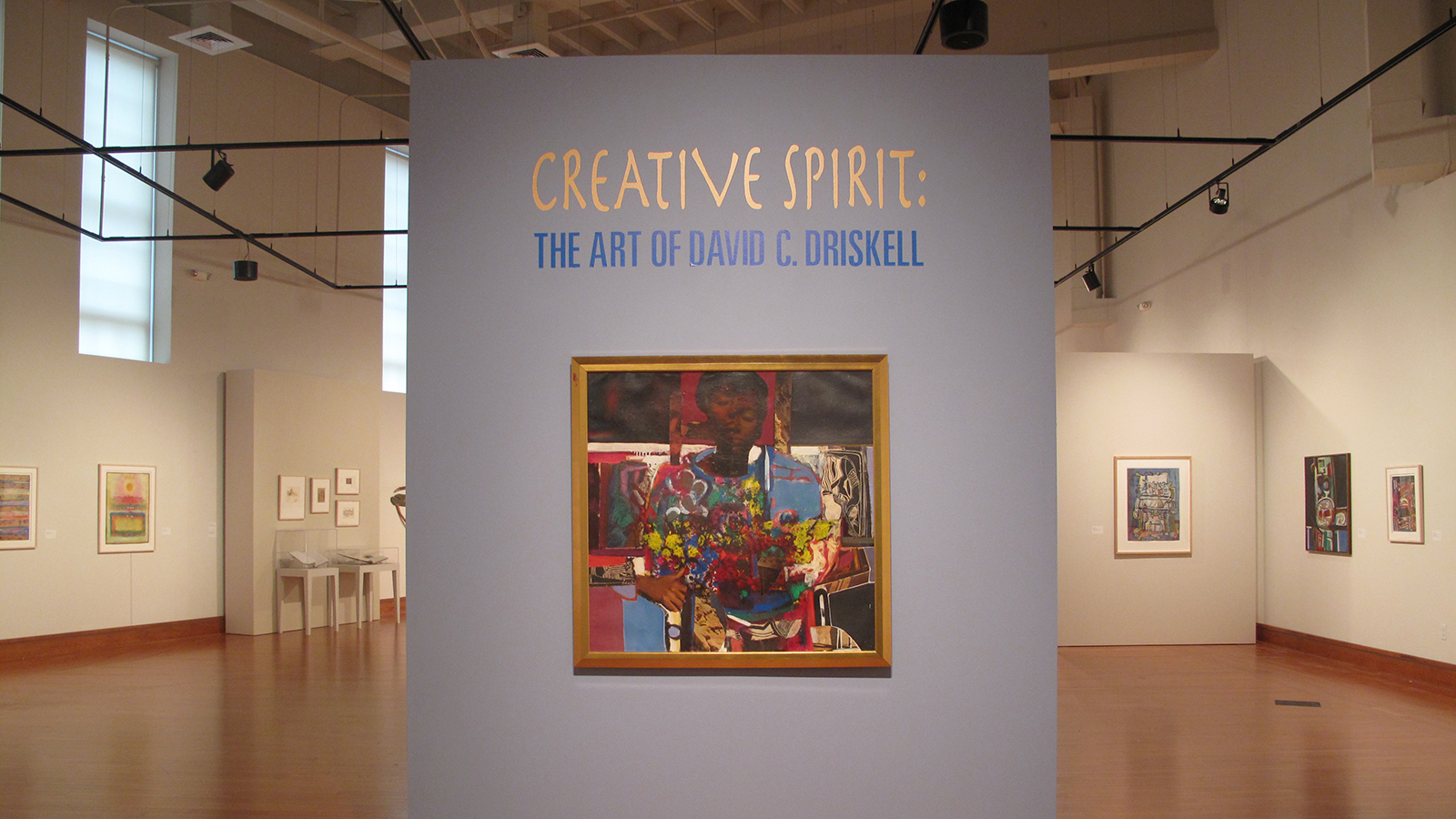 COLLEGE PARK, Md. – Creative Spirit: The Art of David C. Driskell, is co-curated by Dr. Adrienne L. Childs, Independent Scholar, and Dr. Julie L. McGee, Curator of African American Art, University Museums, University of Delaware, and the author of David C. Driskell: Artist and Scholar (Petaluma: Pomegranate, 2006). The exhibition features 60 works, completed from the late 1950s-2010, which represent Driskell’s transition through a multiplicity of media in his artwork. Creative Spirit opens to the public at the David C. Driskell Center for the Study of the Visual Arts and Culture of African Americans and the African Diaspora at the University of Maryland on September 15, 2011, with an opening reception from 5pm to 7pm. The program includes an hour long conversation between Professor David C. Driskell and Artist Carrie Mae Weems. The exhibition will stay on display until Friday, December 16, 2011.

Creative Spirit reveals the totality of Driskell’s artistic practice, celebrating a life lived in the service of what he often refers to as his “priestly calling.” The exhibition highlights and explores seminal themes: Americana, Africana, nature, self-portrait as memoir, celestial music, and the figure. In an interview with co-curator Julie L. McGee, Driskell comments, “Color, my love of nature, and African iconography have all remained vital to my work.” At times inspired by racial politics and at other times by his long held comfort in nature, all of his works display the truly creative spirit of David C. Driskell. Co-Curator Adrienne L. Childs states, “Driskell lives his life in tune with the rhythms of the natural world, which represents for him more than just a subject or a decorative motif.” Driskell takes annual trips to Maine where the natural beauty of the area has inspired him time and time again.

While studying for his Bachelor of Arts degree at Howard University and his Master of Fine Arts at the Catholic University of America, Driskell concentrated on painting and art history; however, in addition to painting, he often created collages, prints, assemblages and other craft work such as album covers, dresses, quilts, tapestries, ceramics, and decorative tiles. Creative Spirit includes some of such works: a ceramic mask, sculpture of a bird, kitchen tiles, and journals from his many travels. Incorporating icons and styles from around the world from firsthand experience, McGee says, “Creative Spirit brings together a selection of works that directly address visits to Africa, including the Strathmore Sketchbook from Nigeria, 1969-1970.” This exhibition displays the outcome of many inspirations and motivations which led David C. Driskell’s creative spirit to create his diverse yet unified oeuvre.

Creative Spirit highlights Driskell’s multifaceted practice, one developed in studios from Maryland to Maine and nurtured within educational institutions from Talladega College and Howard University to Fisk University and the University of Maryland. For Driskell, art is a fundamental human endeavor and the artist’s voice an irrepressible clarion. David C. Driskell’s legacy is sure to continue to inspire many for years to come. In addition to Driskell’s artworks presented in Creative Spirit, the Center will display about 15 photographs taken by New York-based photographer Frank Stewart which depict David C. Driskell over the course of four decades. David C. Driskell through the Lens of Photographer Frank Stewart will be on display in the Center’s Gallery lobby.

Prof. Driskell studied at Skowhegan School of Painting and Sculpture, ME, and received his undergraduate degree in art at Howard University (1955) and a MFA degree from Catholic University (1962). He joined the faculty of the Department of Art at the University of Maryland in 1977 and served as its Chair from 1978-1983. He has been a practicing artist since the 1950s and his works are in major museums throughout the world, including the National Gallery of Art, the High Museum of Art, and Yale University Art Gallery, to name a few. In 1976, Driskell curated the groundbreaking exhibit “Two Centuries of Black American Art: 1750-1950” which laid the foundation for the field of African American Art History. Since 1977, Prof. Driskell has served as cultural advisor to Camille O. and William H. Cosby and as the curator of the Cosby Collection of Fine Arts. In 2000, in a White House Ceremony, Prof. Driskell received the National Humanities Medal from President Bill Clinton. In 2007, he was elected as a National Academician by the National Academy.

Frank Stewart is an award-winning photographer; he currently serves as Senior Staff Photographer for Jazz at Lincoln Center. He is a member of Kamoinge, a New York-based collective of African-American photographers. His work has been included in solo and group exhibitions at venues such as the Schomburg Center for Research in Black Culture in New York City, as well as the Museum of Contemporary Art in Los Angeles, CA, and the Corcoran Gallery of Art in Washington, DC.

Born in Nashville, TN in 1949, Frank Stewart grew up in Memphis, TN, and Chicago, IL. He attended the Art Institute of Chicago and received a BFA in photography from Cooper Union in New York City.

Carrie Mae Weems was born in Portland, Oregon in 1953. She studied modern dance after graduating from high school. She received her first camera in 1973 and immediately started taking pictures while studying photography from 1974-1976 at San Francisco City College. Weems continued her studies at the California Institute of the Arts, Valencia. She graduated in 1981 with her BFA and went on to receive her MFA in 1984. Weems’ artwork comprises a variety of media including photographs, text, fabric, audio, digital images, installation, and video. She has garnered numerous awards over the span of her career, including Photographer of the Year by Friends of Photography in 2005, as well as the Skowhegan Medal for Photography, and the Joseph H. Hazen Rome Prize Fellowship.

About the David C. Driskell Center

The David C. Driskell Center celebrates the legacy of David C. Driskell – Distinguished University Professor Emeritus of Art, Artist, Art Historian, Collector and Curator – by preserving the rich heritage of African American visual art and culture. The Driskell Center is committed to preserving, documenting and presenting African American art. This exhibition is supported in part, by a grant from the Maryland State Arts Council.