These things piqued my interest and I thought, well, someday I’d like to collect materials…and so I began collecting letters, I began writing to people when I was a senior at Howard University; to important people, getting to know them, people that I’d been introduced to…the audacity, one might say. 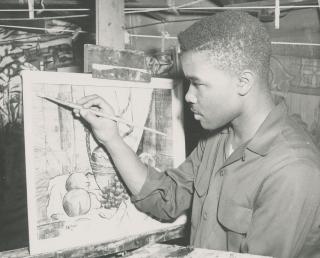 David C. Driskell is known as an art historian, curator, collector, and an artist; a colorist who worked as a painter, collagist, printmaker, quilter, and even a ceramicist. He began assembling the David C. Driskell Papers, his archive of African American art, in the 1950s. Reflecting in 2009 on his early ambitions to establish an archive, Driskell noted the influence of his professors, James V. Herring and James A. Porter, at Howard University in Washington, D.C., but also the early influence of his father, the Reverend George Washington Driskell, whose meticulous organization of his sermons made an early impression. While much of the material Driskell collected before 1964 was lost, the collection continued to grow to some 50,000 items by the time Professor and Mrs. Driskell donated the collection to the David C. Driskell Center at the University of Maryland, College Park in 2011.

The David C. Driskell Papers collection is organized into 11 series, or divisions, which document Driskell’s journey as an artist, scholar, educator, and curator, but also the artistic practice of his peers. The largest of the series, “Series 4: African American Art and Diaspora, 1901-2012” (52 archival boxes) consists of materials Driskell collected to inform his own studies. The second largest series, “Series 5: Artists and Individuals, 1930-2012” (47 boxes), contains correspondence between Driskell and other artists, some of which is included in the current exhibition. There are also series devoted to audio and video materials (Series 10) and photographs and 35mm slides (Series 11). Material drawn from both these series is included in the exhibition as well. Like all great archives, spending sufficient time with the David C. Driskell Papers is, in some way, to approximate his journey, his education, his experience among his peers. 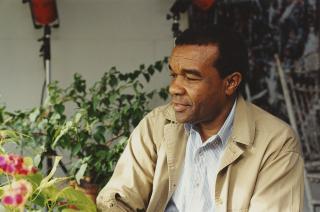 While there are countless themes running through the collection, a common denominator is Driskell’s ongoing, lifelong communion with his teachers, fellow artists, and the institutions he helped to build and sustain. Dipping into the photographs or documents from later decades, we read a friendly note from the artist Loïs Mailou Jones, one of Driskell’s first and most influential professors. In the photos, we see Driskell with Jacob Lawrence, his elder, at Fisk University in Nashville, Tenn., in the 1960s, and again at Skowhegan School of Painting and Sculpture in Maine in the 1990s, as fellow artists and friends. Further, we examine Driskell’s design for a stained glass window at Talladega College in Alabama where Driskell had his first teaching position three decades prior.

In the 1950s, David C. Driskell attended Howard University in Washington, D.C., where he met his mentor, James A. Porter, then a Department of Art faculty member.

Driskell established himself as an artist during the 1950s with his first solo exhibitions and as an academic and curator at Talladega College in Alabama, his first teaching position. It was also during this time that Driskell began collecting the materials that would become the David C. Driskell Papers.

The video linked below, from 2004, is an interview conducted by Julie L. McGee as research for her biography of Driskell, "David C. Driskell: Artist and Scholar" (2006). In it, Driskell recounts his Howard University days.

During the 1960s, David C. Driskell solidified his reputation as a scholar. He returned to Washington, D.C., to teach at Howard University, and later accepted a position at Fisk University in Nashville, Tenn., where he reshaped the Department of Art.

Driskell also commenced a life of world travel that would influence his art,  scholarship, and dedication to his archive in the years to come.

In the early 1970s, David C. Driskell traveled extensively throughout Africa, deepening his connection to African art and artists.

As a curator, 1976's Two Centuries of Black American Art and its corresponding catalogue introduced Americans to a hidden heritage in American art and further defined the field of African American art scholarship, pioneered by Driskell's mentor, James A. Porter. In 1977, Professor Driskell joined the Department of Art at the University of Maryland, College Park.

An audio recording of a Voice of America radio interview with David C. Driskell, recorded in 1972 in Monrovia, Liberia, and the film "Two Centuries of Black American Art" (1976), written and directed by Carlton Moss are linked below.

By the 1980s, David C. Driskell was an established scholar and curator.

His artistic practice was being recognized with his first major retrospective, David Driskell: A Survey, which opened in 1980 at the University of Maryland Art Gallery on the College Park campus. During this decade, he continued to travel widely, including trips to Japan and Mexico as well as three visits to Brazil.

A 1980 video interview which includes a visit to Driskell's studio as a fellow at Yaddo artists' colony that summer and an audio interview from 1986 in which Driskell describes the history and current state of Black art are linked below.

The 1990s and 21st century brought greater recognition to David C. Driskell’s achievements, including being awarded the National Humanities Medal by President Clinton in 2000.

In 2001, the David C. Driskell Center for the Study of the Visual Arts and Culture of African Americans and the African Diaspora at the University of Maryland, College Park was founded.

"Hidden Heritage: The Roots of Black American Painting," Maureen McCue's 1990 documentary, narrated by David C. Driskell, can be viewed with the link below.