August 26, 2009 David C. Driskell Center for the Visual Arts and Culture of African Americans and the African Diaspora 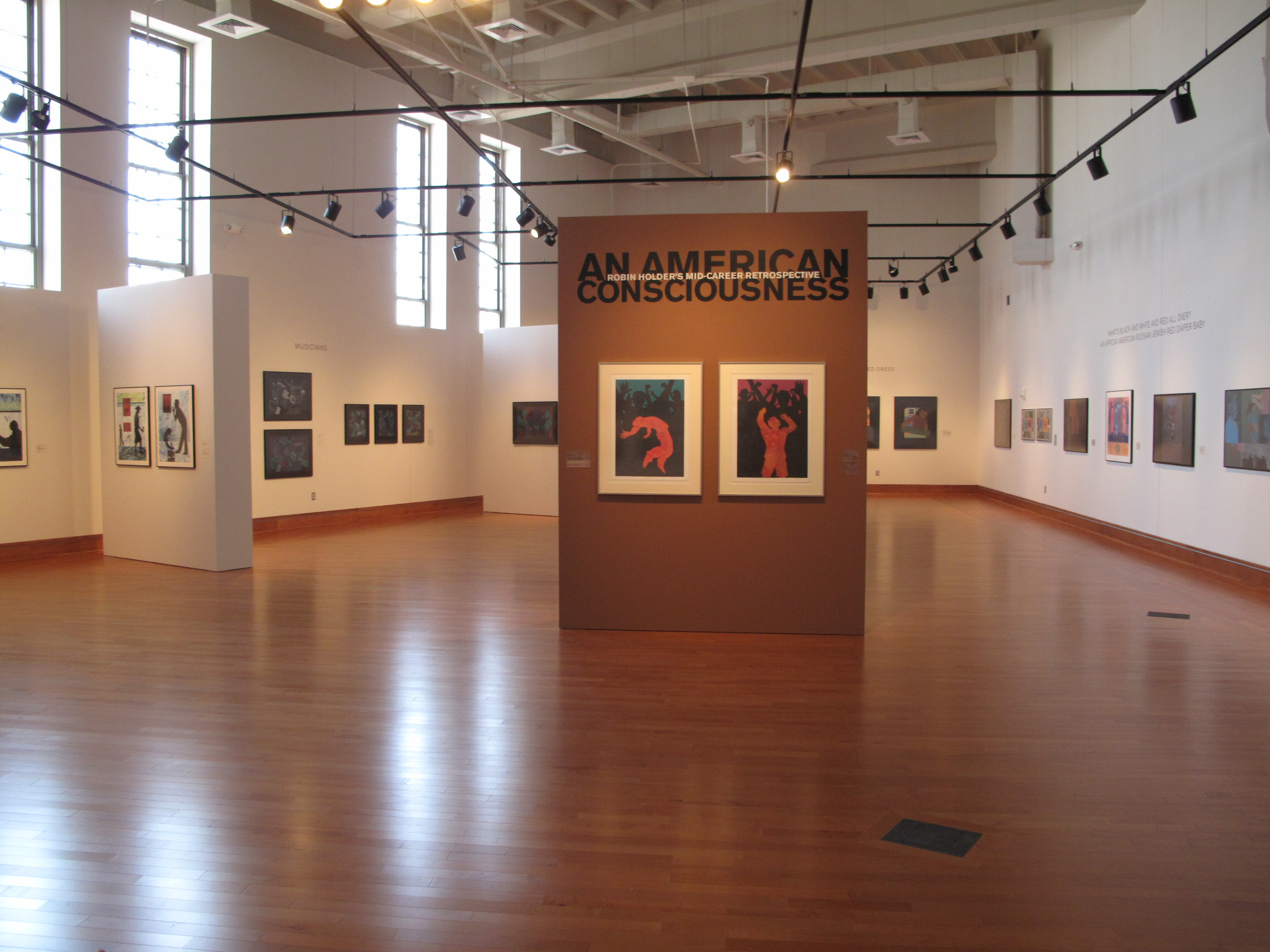 COLLEGE PARK, MD. --- An American Consciousness: Robin Holder’s Mid-Career Retrospective features 65 original prints at the David C. Driskell Center for the Study of the Visual Arts and Culture of African Americans and the African Diaspora at the University of Maryland, College Park [UMCP]. An American Consciousness will be on view from October 8 through December 11, 2009. The public opening reception will be held on October 8, 2009 from 5:00-7:00PM at the Driskell Center’s gallery, 1207 Cole Student Activities Building, UMCP.

Curated by the Center’s Deputy Director, Dorit Yaron, the exhibition features works by New York City printmaker, Robin Holder, who integrates a layered process of image making with an unusual social and political consciousness to create her own aesthetic. The works included in this exhibition reflect the unique and vast complexities of our American identity and sensibility. Robin Holder has the unique ability to create images with beauty and substance while addressing difficult issues such as race, gender, religion and cultural diversity in the United States of America. An American Consciousness, the first retrospective exhibition of Robin Holder’s work, is a celebration of this internationally acclaimed printmaker and arts educator.

The works engage the viewer in Holder’s commitment “to exploring the woven texture of diverse cultures within families, communities and societies, through collaging, layering and mixing printmaking techniques.” Robin Holder’s self-reflective images are a meditation on identities, women’s empowerment and social realities, as she draws from her identity as a woman of myriad ethnic, sociopolitical, and spiritual influences.

Robin Holder, a daughter of an African-American Christian father and a white Russian American Jewish mother, grew up in the fifties and sixties in New York City. She worked at The Blackburn Printmaking Workshop developing, coordinating and implementing programs, and as a Fellow Artist. For more than 30 years she has worked as a teaching artist throughout the New York City area. Holder is the recipient of many grants and awards, including awards from The Brooklyn Arts Council, The Mid Atlantic Arts Foundation, and The New York Foundation for The Arts.

The exhibition is accompanied by a fully illustrated exhibition catalogue with foreword by Prof. David C. Driskell and three essays, including a conversation between artist, Robin Holder, and curator, Dorit Yaron; a descriptive analysis by Dr. Lisa Farrington, founding Chair of the Department of Art & Music at the City University of New York's Midtown Manhattan Campus--John Jay College; and an essay on public art by Dr. Michele Cohen, Program Director of Public Art for Public Schools in New York City. In addition, the catalogue includes color reproductions of all the works exhibited in An American Consciousness. An online version of the catalogue, supported by a grant from The Ford Foundation, will be available on the David C. Driskell Center exhibition website.

In conjunction with the exhibition An American Consciousness, the David C. Driskell Center developed an Arts and Education Program, which aims to validate creativity and encourage artistic development within the community. The Education Program reaches a wide range of middle and high school students in Prince George’s, Montgomery, and Anne Arundel counties in Maryland, in an exploration of Holder’s art and printmaking techniques, inspiring students to create new works while maintaining their own individual artistic style. The program includes lectures by Deputy Director Dorit Yaron and printmaking workshops presented by Robin Holder. Thirteen student works, selected by the Driskell Center Staff, will be exhibited with An American Consciousness. The program is supported by grants from The Ford Foundation and Prince George’s Arts Council.

The David C. Driskell Center celebrates the legacy of David C. Driskell – Distinguished University Professor Emeritus of Art, Artist, Art Historian, Collector and Curator – by preserving the rich heritage of African American visual art and culture. The Driskell Center is committed to preserving, documenting and presenting African American art, as well as replenishing and expanding the field of African American art. This exhibition is supported, in part, by a special fund from the Office of the President at the University of Maryland, College Park, and a grant from the Maryland State Arts Council.

The exhibit, An American Consciousness: Robin Holder’s Mid-Career Retrospective remains open in the Driskell Center until Friday, December 11, 2009. The exhibition was the center’s first exhibit of the 2009-2010 academic year.