December 08, 2022 David C. Driskell Center for the Visual Arts and Culture of African Americans and the African Diaspora 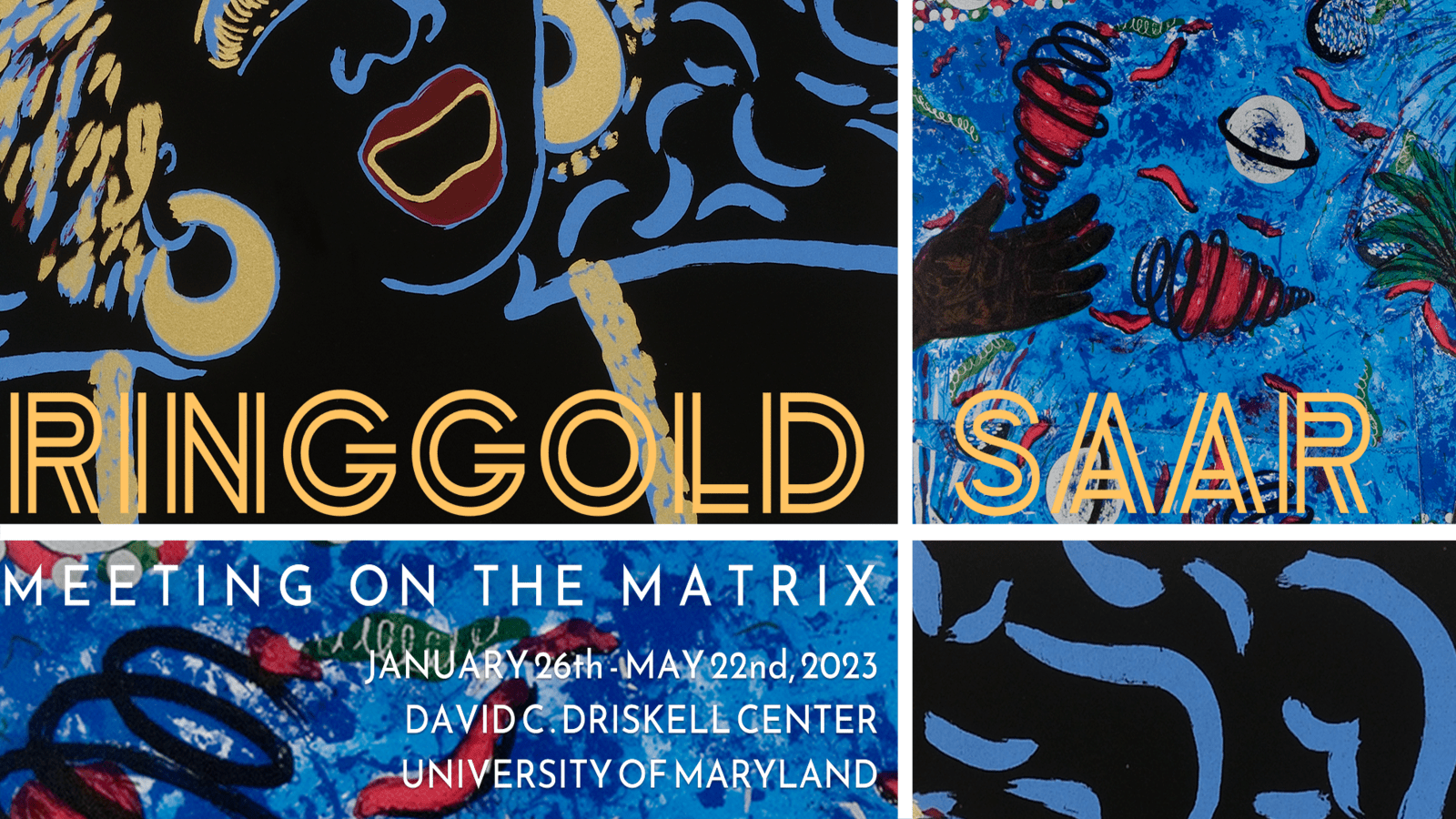 The Spring 2023 show, RINGGOLD | SAAR: Meeting on the Matrix, will feature print works by the two artists and run from January to May, 2023. 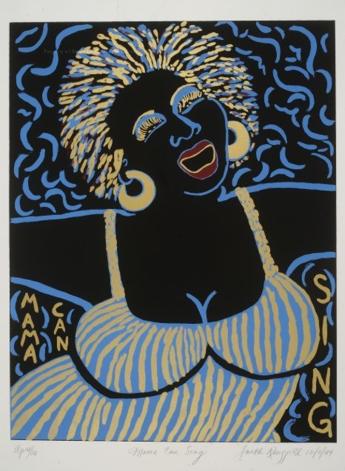 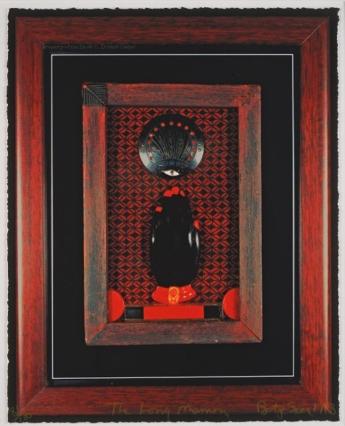 COLLEGE PARK, MD. – The David C. Driskell Center for the Study of the Visual Arts and Culture of African Americans and the African Diaspora at the University of Maryland, College Park, is proud to present its spring 2023 exhibition, RINGGOLD | SAAR: Meeting on the Matrix; the exhibition is on view at the Driskell Center from January 26 – May 22, 2023. The exhibition will be the first time the works of Ringgold and Saar are featured together in an exhibition devoted to print media. This exhibition was collaboratively curated by graduate students in the University of Maryland Department of Art History and Archaeology, including: Maura Callahan, Ashley Cope, Montia Daniels, Joohee Kim, Caroline Kipp, Cléa Massiani, Maggie Mastrandrea, Dominic Pearson, Gabrielle Robinson-Tillenburg, with support from Dr. Jordana Moore Saggese and the Driskell Center staff. For further historical, thematic context to the exhibition and the intersecting practices of both artists, the curators created a compendium website containing additional prints from the Center’s collection, essays, interactive features, audio tours, and archival materials, forming connections between key works, in and beyond the gallery. Please visit black-printmaking.artinterp.org/ or driskellcenter.umd.edu for more information.

ABOUT THE EXHIBITION: RINGGOLD | SAAR: Meeting on the Matrix

For decades, Faith Ringgold (b. 1930) and Betye Saar (b. 1926) have incorporated printmaking as a vital component of their multidisciplinary practices, yet their mutual connection to printmaking remains underrecognized. RINGGOLD | SAAR: Meeting on the Matrix highlights the print work of these two landmark artists, providing a window into the material and conceptual explorations at play in their distinct practices. Both artists have uniquely utilized the matrix—the printmaking surface which transfers ink onto paper or fabric—as a site of possibilities for experimentation, storytelling, and activism.

Through this unique and multivalent medium, two legacies meet and continue to inspire. RINGGOLD | SAAR: Meeting on the Matrix places the prints of these two artists in thematic and formal conversation to cast each other's work in a new, dynamic light while simultaneously emphasizing the singular power of each artist's contributions to the medium.

This exhibition is sponsored by The David C. Driskell Center, the Maryland State Arts Council, the Elizabeth Carter Foundation, The Art Gallery at the University of Maryland, and Arts for All. Additional support was provided by the Department of Art and the Department of Art History and Archaeology. 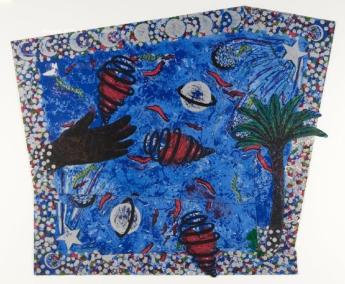 Faith Ringgold, born 1930 in Harlem, New York, is a painter, sculptor, teacher, activist and author of numerous award winning children’s books. Ringgold received her B.S. and M.A. degrees in visual art from the City College of New York in 1955 and 1959. Professor Emeritus of Art at the University of California in San Diego, Faith Ringgold has received 23 Honorary Doctor of Fine Arts degrees.

Faith Ringgold is the recipient of more than 80 awards and honors including the John Simon Guggenheim Memorial Foundation Fellowship; two National Endowment for the Arts Awards; The American Academy of Arts and Letters Award and the Medal of Honor for Fine Arts from the National Arts Club. In 2017 Faith Ringgold was elected as a member into the American Academy of Arts and Sciences in Boston, MA.

Ringgold’s first story quilt Who’s Afraid of Aunt Jemima? was created in 1983 as a way of publishing her unedited words. The addition of text to Ringgold’s quilted paintings has developed into a unique medium and style all her own.

Tar Beach, Faith Ringgold’s first children’s book, has won over 20 awards including the Caldecott Honor and the Coretta Scott King award for the best-illustrated children’s book of 1991. It was made into an animated short for HBO. The original painted story quilt, Tar Beach, is in the permanent collection of the Solomon R. Guggenheim Museum in New York City.

Faith Ringgold’s artwork is featured on The Metropolitan Museum of Art’s Timeline of Art History, a chronological, geographical and thematic exploration of the most important art from around the world. In 2019, the Serpentine Gallery in London organized a traveling survey of Faith Ringgold’s work. In conjunction with the exhibition BBC produced a full-length documentary, Faith Ringgold: Tell It Like It Is.

Faith Ringgold is as important to the overall culture of America as she is to the specifics of contemporary American art. From her earliest breakthroughs during the turbulent decade of the 1960s and continuing into the new millennium, Faith Ringgold maintains her stature as a creative and cultural force. She is a role model for artists and scholars and continues to influence and inspire others. Faith Ringgold has been represented worldwide exclusively by ACA Galleries since 1995.

As one of the artists who ushered in the development of Assemblage art, Betye Saar’s practice reflects on African American identity, spirituality and the connectedness between different cultures. Her symbolically rich body of work has evolved over time to demonstrate the environmental, cultural, political, racial, technological, economic, and historical context in which it exists.

For over six decades, Saar has created assemblage works that explore the social, political, and economic underpinnings of America’s collective memory. She began her career at the age of 35 producing work that dealt with mysticism, nature and family. Saar’s art became political in the 1970’s namely with the assemblage The Liberation of Aunt Jemima in 1972. As did many of the women who came to consciousness in the 1960’s, Saar takes on the feminist mantra “the personal is political” as a fundamental principle in her assemblage works. Her appropriation of black collectibles, heirlooms, and utilitarian objects are transformed through subversion, and yet given her status as a pioneer of the Assemblage movement, the impact of Saar’s oeuvre on contemporary art has yet to be fully acknowledged or critically assessed. Among the older generation of Black American artists, Saar is without reproach and continues to both actively produce work and inspire countless others.

Banner media provided by the curators.